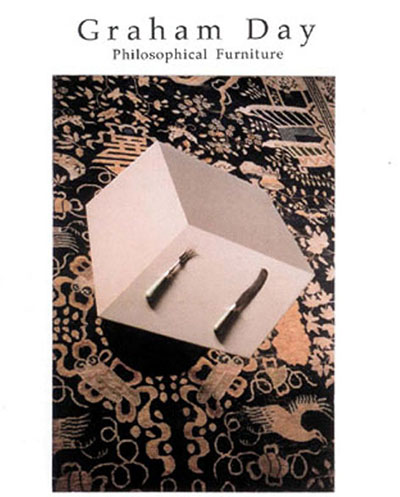 Graham Day’s ambiguous objects have various functions. Modeled on the five ‘Platonic Solids’ at first glance they appear to be convincingly three dimensional yet on closer inspection they are obviously completely flat, an amusing illusion. That sparrows came to pick at the grapes painted by Zeuxis led Goethe to dismiss all talk about deceiving the eye as ‘sparrow aesthetics’ yet “….many illusions of perception are more than mere errors: they may be experiences in their own right. They can illuminate reality. It is this power of illusion to illuminate which the artist somehow commands”.1

They can function as objects of contemplation – known in Indian art as yantras whose purpose is to focus the mind and promote meditation on a jewel-like perfection, completely resolved and irreducible, an Ideal Form as Plato (circa 427-347 B.C.E.) describes the five shapes in his Timaeus dialogue…”in which he outlines a cosmology through the metaphor of planar and solid geometry”2 Yet…”Plato does not describe his God as creating the world out of nothingness, but rather as making order, a cosmos, out of disorder: That is, the elements are already present when Plato begins his account, and he is thus concerned with their properties rather than their origin”3

The importance of the five shapes have resounded throughout history ever since. Andreas Speiser has advocated the view that the construction of the five regular solids was the chief goal of the deductive system of the Greeks and canonized in Euclid’s (fl. circa 300 B.C.E.) famous mathematical work the Elements. Until we reach modern times, roughly the last seven hundred years’ our knowledge of the past is mostly derived from translations made by European scholars from translations made by Arabian scholars of Greek and Hindu manuscripts…” and Hindu tradition associates the icosahedron (one of the five shapes) with Brahma, the supreme creator himself, and as such this image is the map or plan of the universe.”4 An ideal object for contemplation.

The five shapes can also function as functional objects. On display in the Ashmolean Museum in Oxford are a granite group of the five solids carefully carved and decorated; found in late Neolithic contexts in Scotland. Their use is unknown, but presumably they had a symbolic significance they may have been used as symbols of authority by family or clan leaders or were perhaps used in divination. Leonardo da Vinci illustrated them for Fra Luca Pacioli’s 1509 work De Divina Proportione where they appear as though made from elegant strips of wood. Famously, Johannes Kepler; (1571 – 1631) mistakenly thought that he had penetrated the secrets of the Creator and discovered the underlying organisation of the galaxy within the spatial relationships between the five shapes.

In 1946 Buckminster Fuller projected the surface of a sphere onto the inside of an icosahedron, this became his Dymaxion Map which when opened flat became the first two dimensional map to give an accurate representation of the world’s land masses. Today the five shapes no longer command the respect of scientists, Herman Weyl laments that …”we still share Kepler’s belief in a mathematical harmony of the Universe. It has withstood the test of ever widening experience. But we no longer seek this harmony in static forms like the regular solids, but in dynamic forms.”5 Graham Day has wittingly referenced this abandoned functionality of the five shapes by allowing his group to also be used as tables, i.e. something to conveniently support something else. 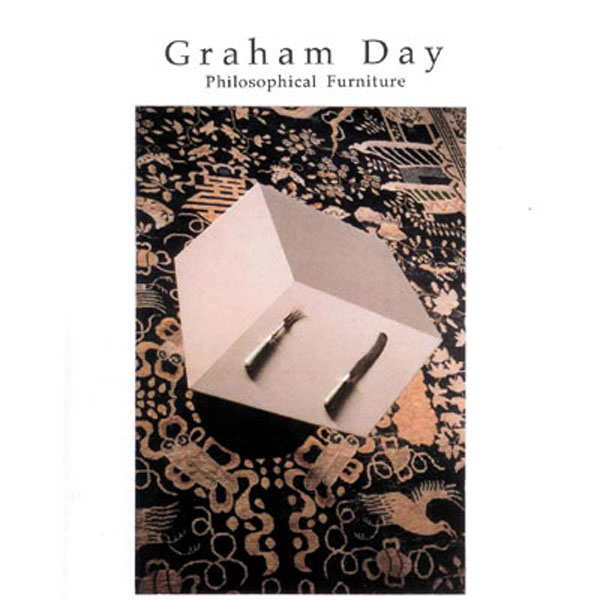 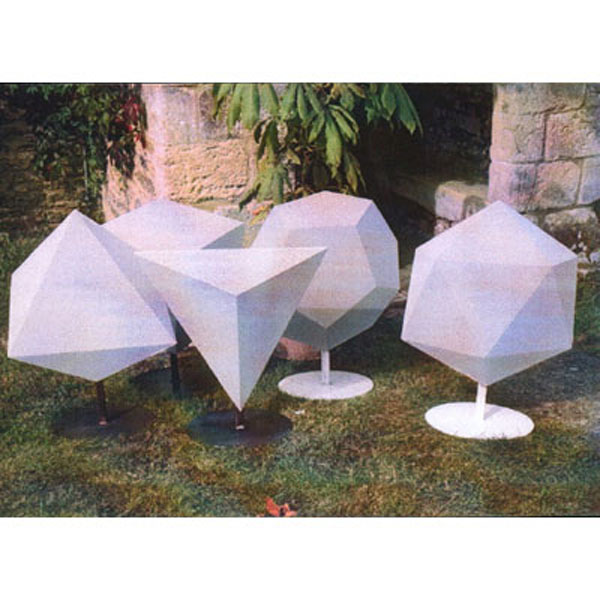 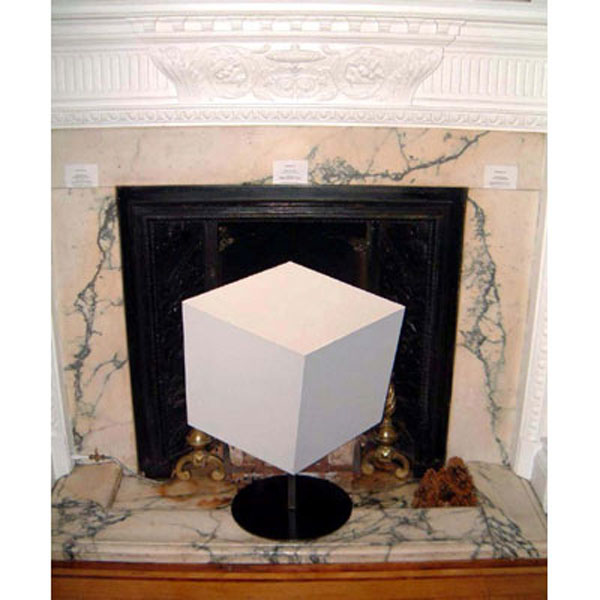 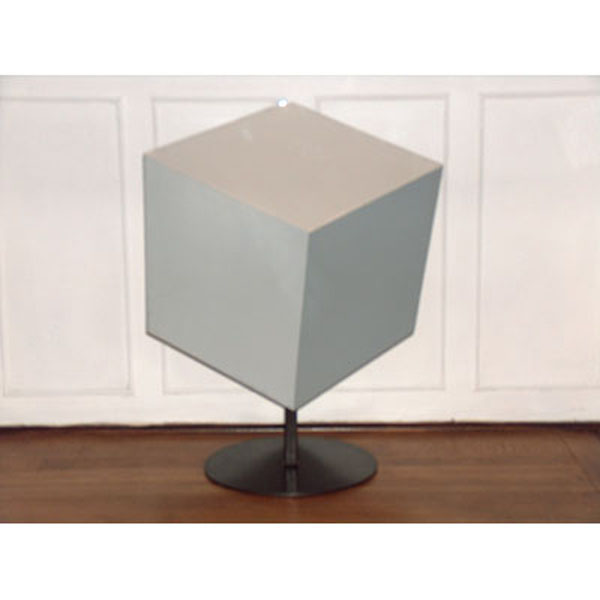 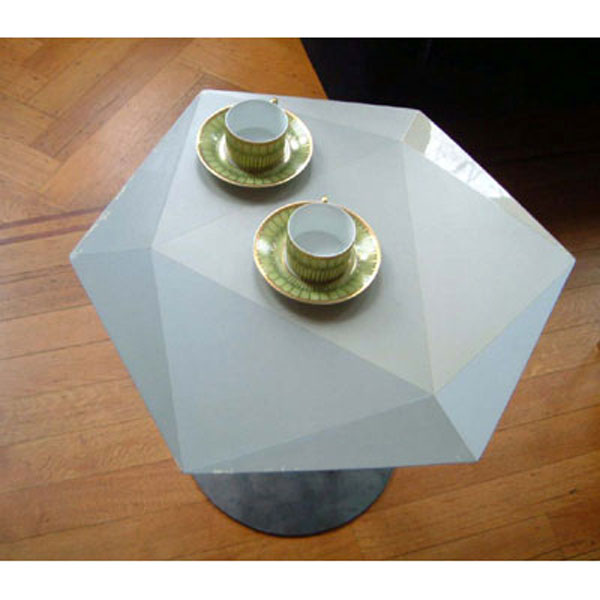 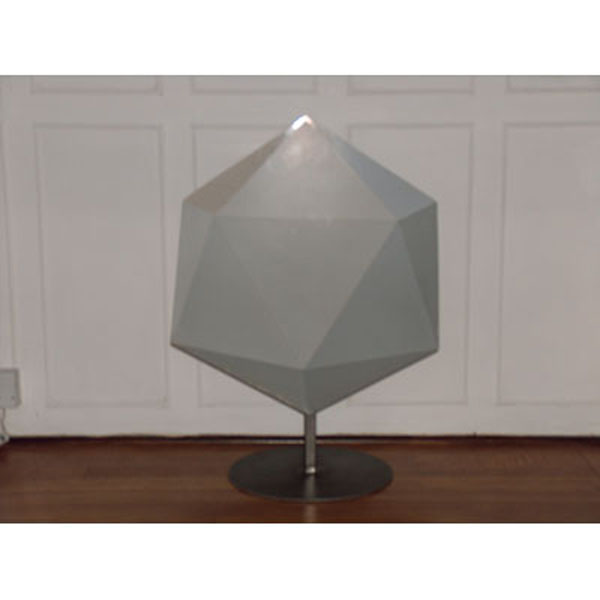 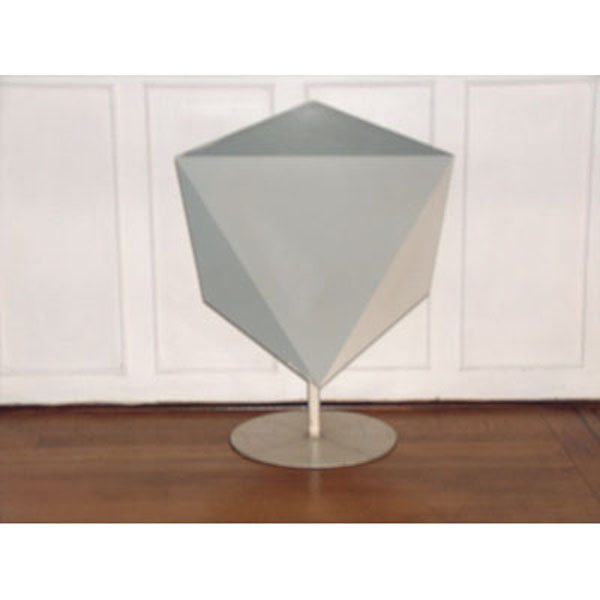 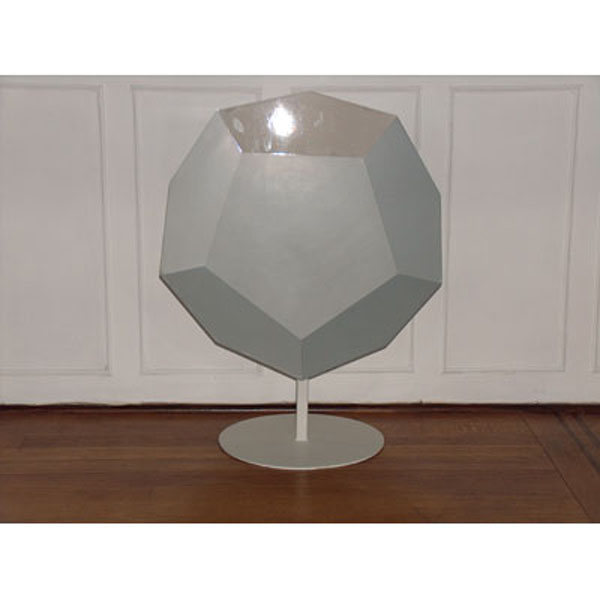