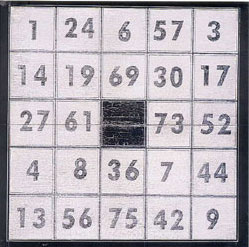 From 26 March to 26 April 2003 Studio Caparrelli will be showing a spectacular exhibition of works by English artist Graham Day. Viewers will be intrigued by this new series of over 30 beautifully painted works which show geometric patterns; complex mathematical sequences, flaking gilt-laden objects reminiscient of old religious artifacts, on one occasion represented visually as what looks like torn up raffle tickets.

Several of the works are mounted on old gaming boards – the kind that fold down the middle, this emphasises Day’s fascination with using forms that relate to themes of rules, games, science, and also helps to explain the feeling in the viewer that they are pieces which have some kind of ‘meaning’ – like diagrams or objects of devotion.

Day himself resists the temptation to attatch any specific meaning to his images, saying simply that “…shapes have an inherent power and fascination that predates their significance; squares are square and circles round….” This unfettered enjoyment of form as form is part of what inspired the initial, rejected title of the exhibition – Intellectual Suicide.

Day’s interest in the ideas of science and philosophy is ultimately that of an outsider, hence the actual title of the show- Naieve Science – this is offset by a fresh and unspoilt joy in the materials and techniques of traditional craftspeople, especially from the the Near and Far East.

There is a discernible influence on both his working techniques and results from his interest in a huge range of creative practices – he cites as influences all of the anonymous carpet weavers, masons, scribes, mapmakers and others whose unsigned work happly survives.

Day’s works are eye-catching and varied, a fascinating and appealing mixture of the calcuated and spontaneous kinds of curiousity that demonstrate the artist’s own boundless speculation about objects and images both old and new and from near and far.

I spend my whole time looking and thinking about images. Different things can express the same idea or evoke the same emotion, you never know where the answer lies. Innocent objects can unwittingly express grand themes.

The Intelligence of the Heart

Day believes that in this post modern age where endless information and images are available
for consumption it is inevitable that you will become interested in other cultures, their ideas and artifacts and that it is perfectly permissable to be influenced by them. You are bound not understand fully the comprehensiveness of the symbolism or appreciate the relationships between objects and their environments without in depth study but the fact that you are attracted to ideas and motifs other than those in to which you were born should be recognised and acknowledged not avoided or thought invalid. There are still arguments against this emotive response: although the accusations of ‘cultural rape’ common a decade ago are now seen as ridiculously parochial.

A common example of the argument against multicultural fascination is that if a European puts an African wooden carving of a figure on their coffee table it is as meaningless as a tribesman wearing an empty Weatabix packet on his head misses the point; it might be absurd even insulting but to the participants it was necessary.

It is true than profound meanings that have taken millenia to crystallise are not perceived by the eclectic culture consumer and the continuation of superficial appropriation will dilute and make meaningless objects. Day sees this as inevitable even desirable, the justifing principle being that it frees up shapes colours and images from exclusive domains and pitches them back into the open ocean where they can be re-caught and eaten.

In this exhibition he presents us with pictures that allow us, the 21st century spectators, to respond intuitively with our differing levels of knowledge and experience to some basic shapes and colours that have been used by different peoples at different times to express different ideas and emotions. What proportion of new whorl he adds to the fractal of tradition is for us to individually decide.

One of the motivating forces behind this exhibition is the Indian Yantra.
“A yantra is a geometrical diagram belived to possess mystical powers and employed as a tool to aid meditation.”

Day has worked with these ideas and images, accepting the acknowledged grandeur of the themes and is not striving for re-interpretation or innovation but is concerned with contributing to an imaginary tradition. A parallel example might be the artist who painted a madonna and child unconcerned that other artists before them had used the same components, what separates them is not the subject but the method of its realisation and the different audience that the work might reach.

Day has created objects that appear to have had a use, gaming boards the rules of which we don’t know; teaching aids where we have to supply the answers and the questions; the same book that expresses the same meaning but as seen by different cultures. The one uniting theme running throughout this exhibition is the most basic human shape: the square and its divisions. 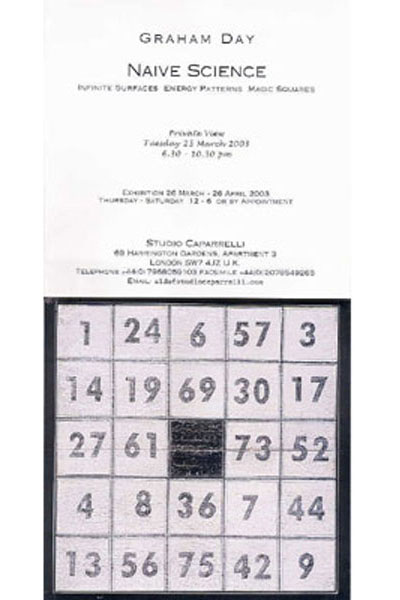 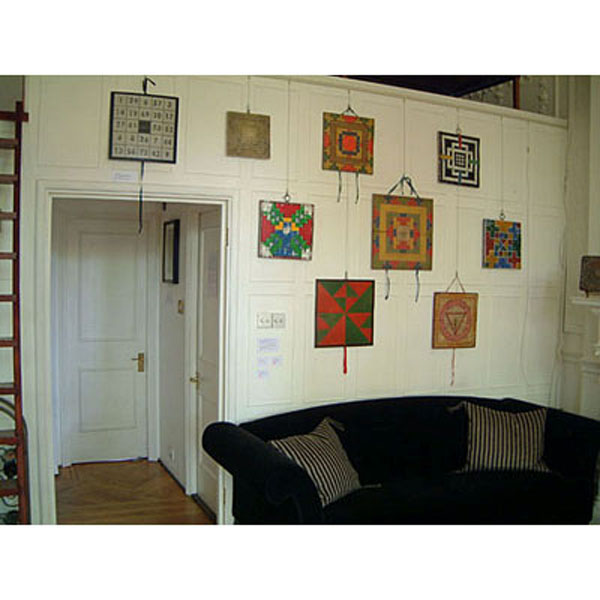 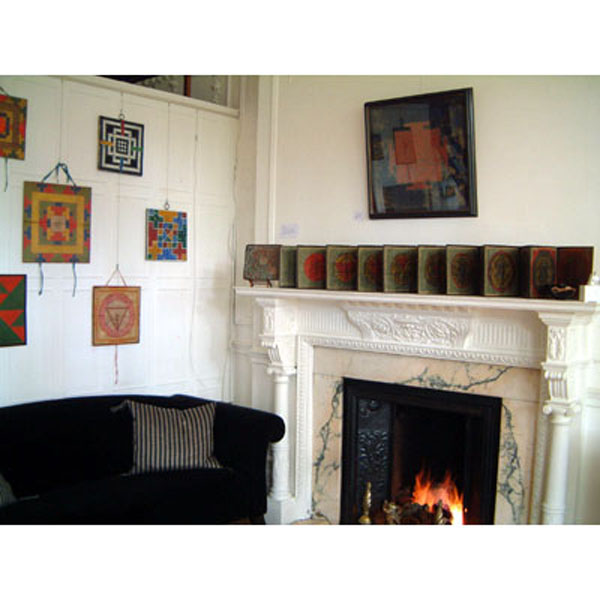 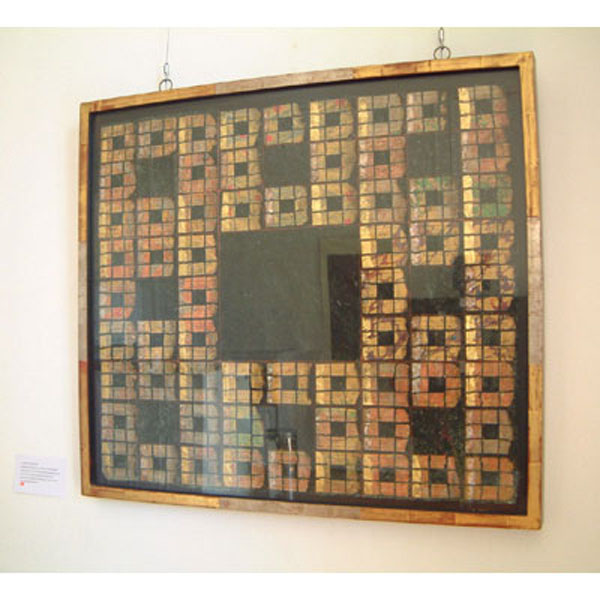 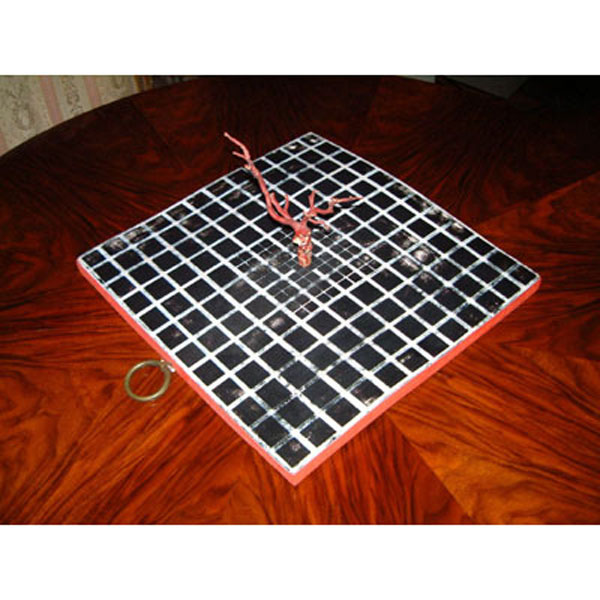 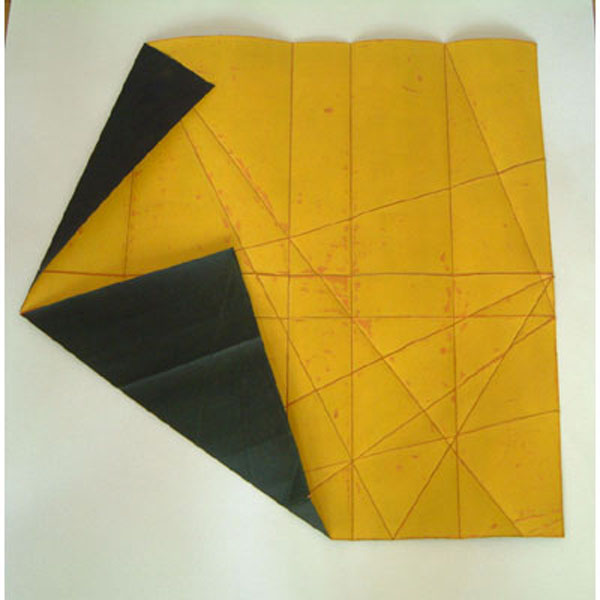 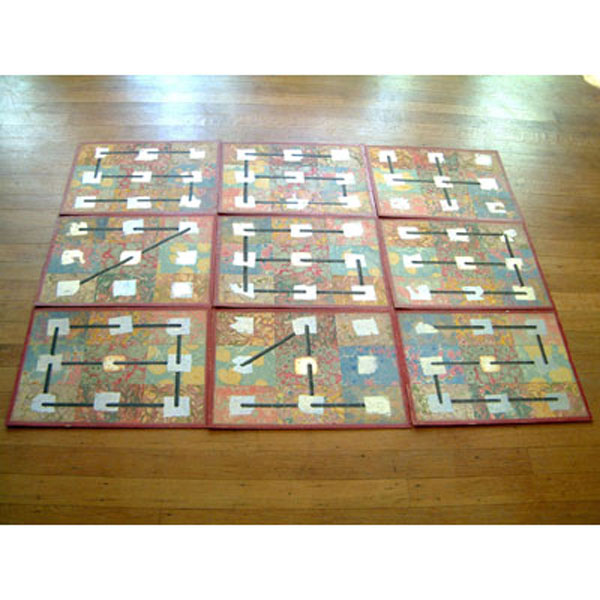 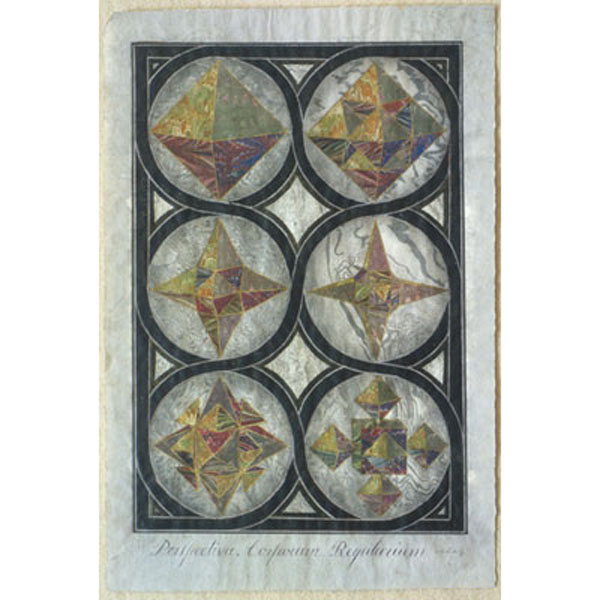 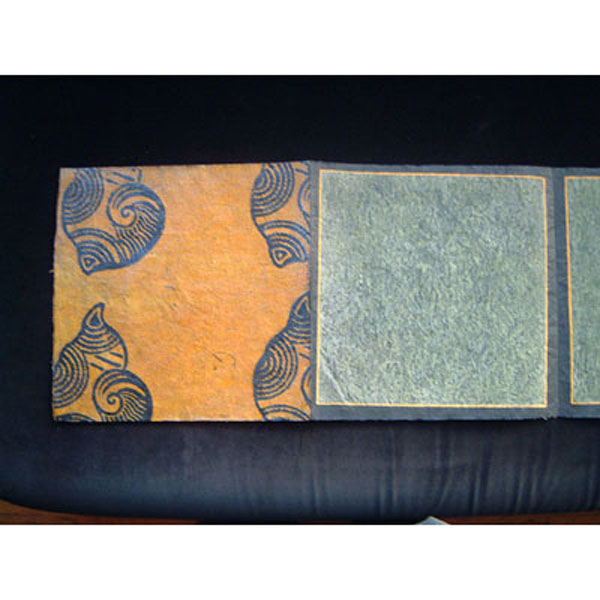 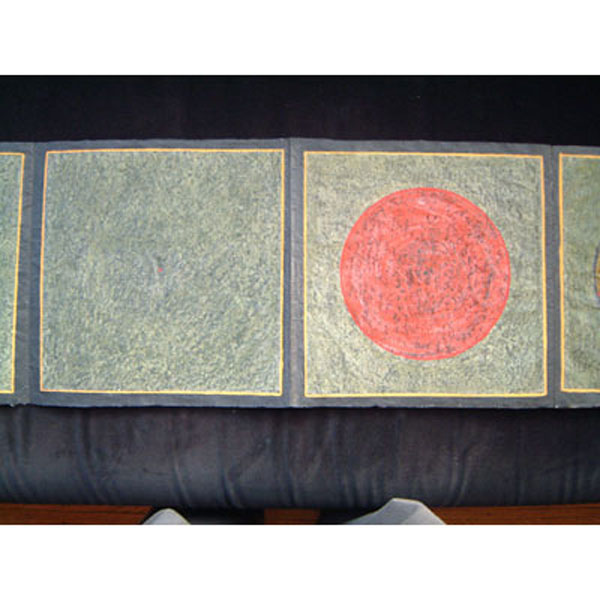 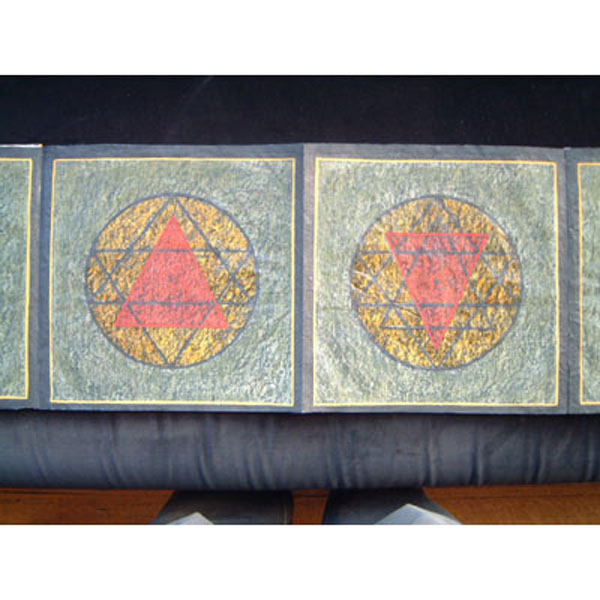 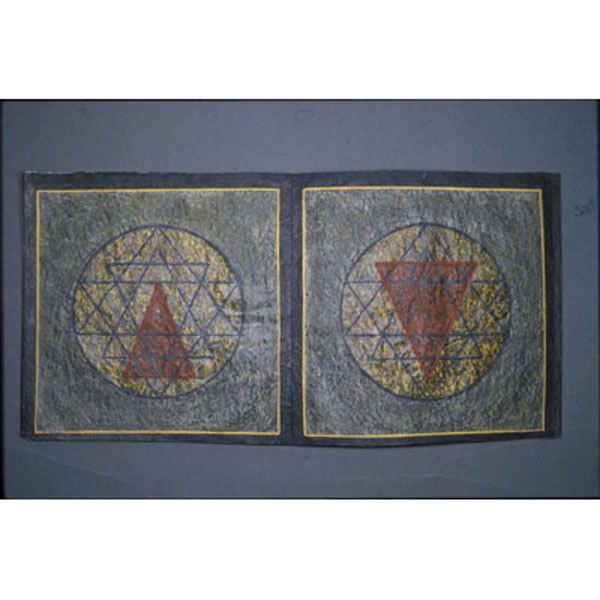 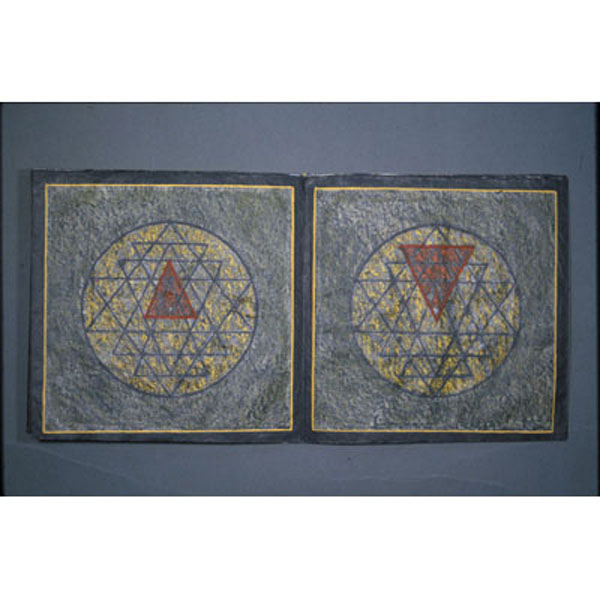 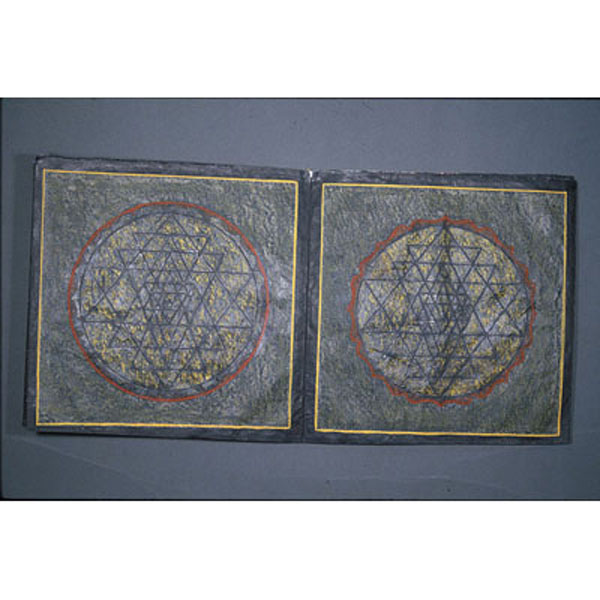 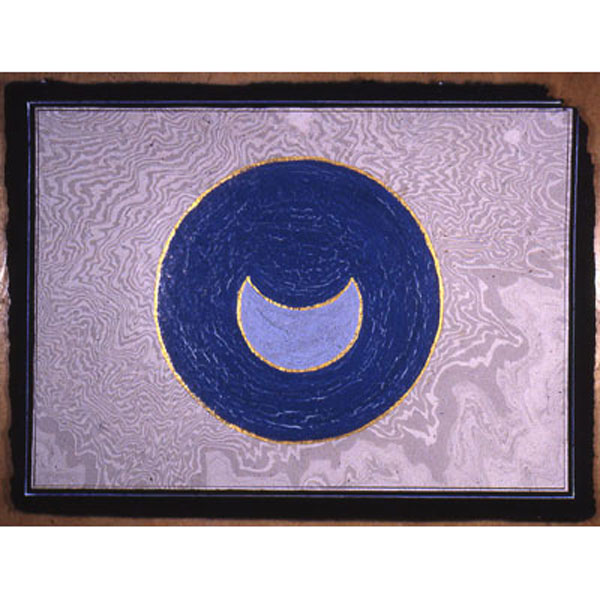 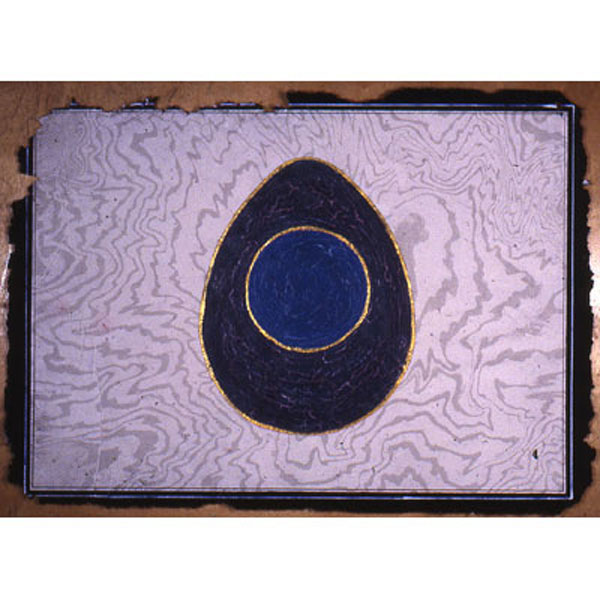 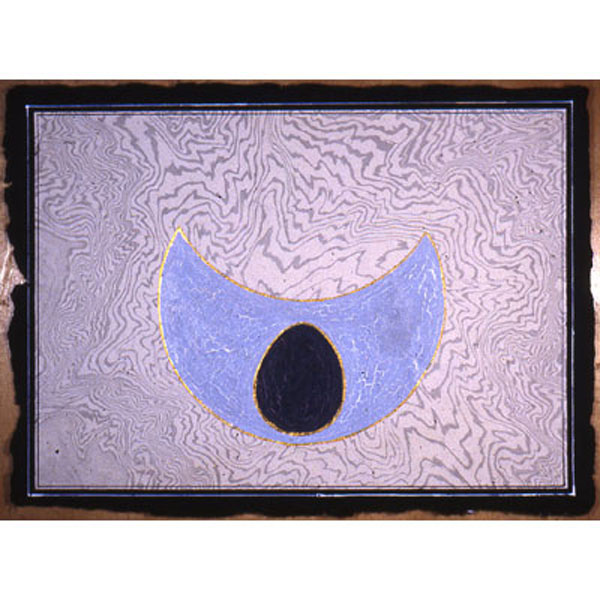 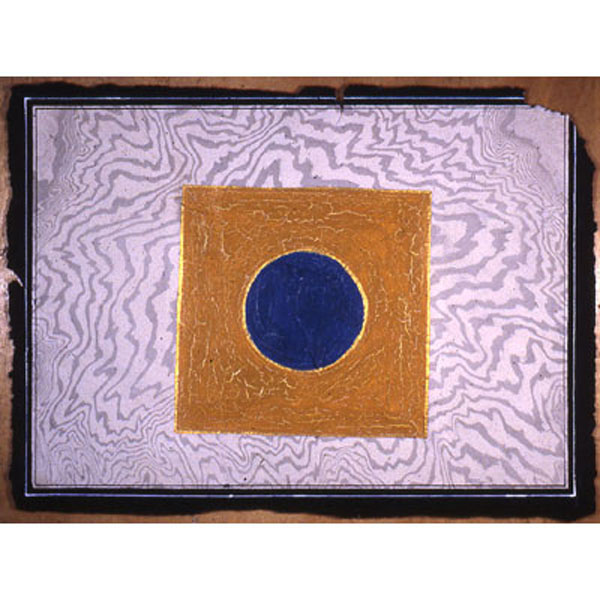 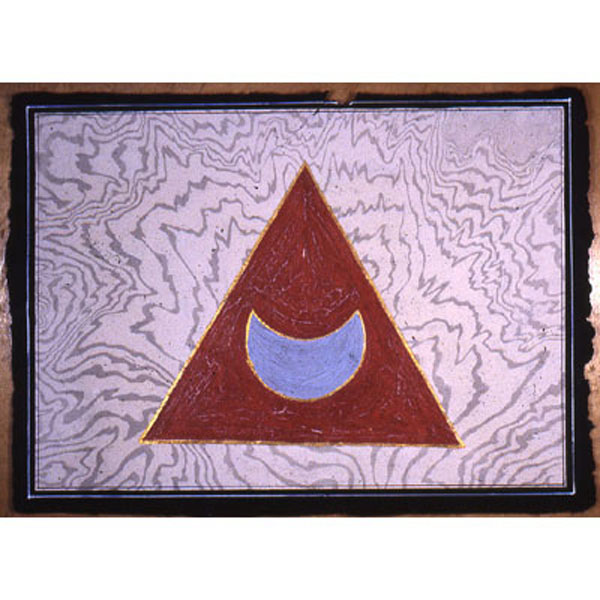 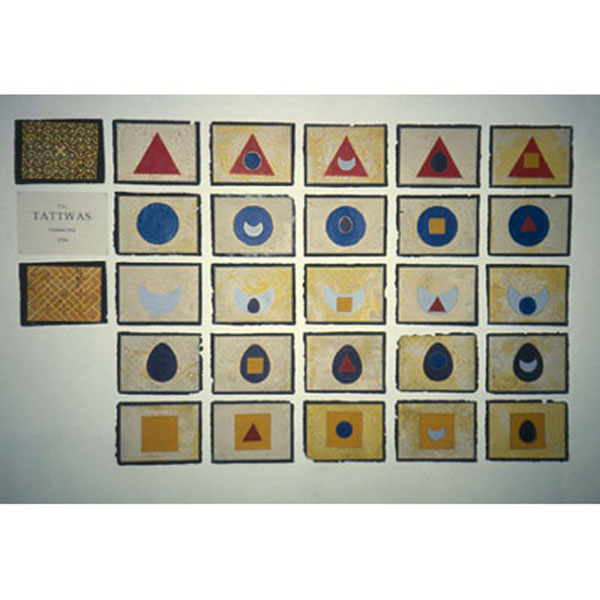 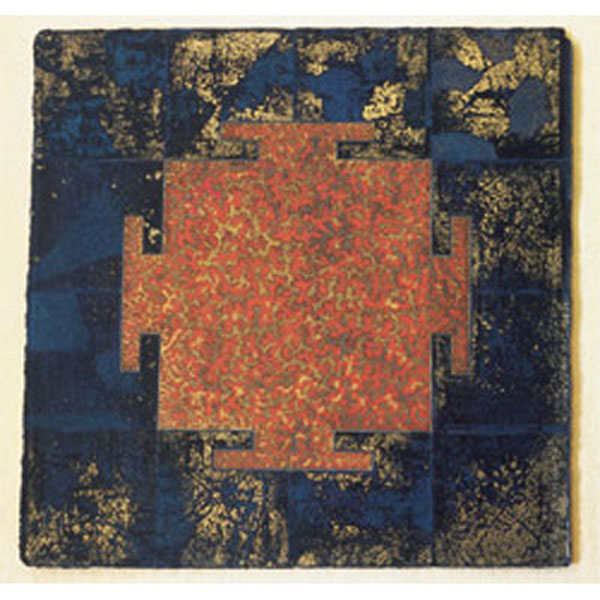 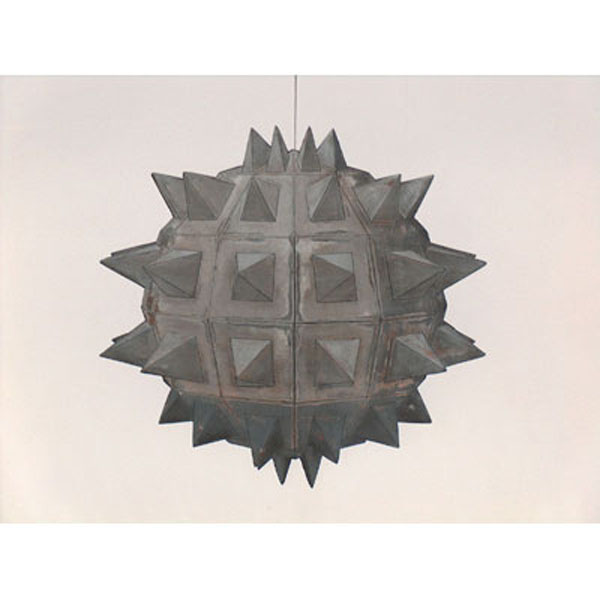