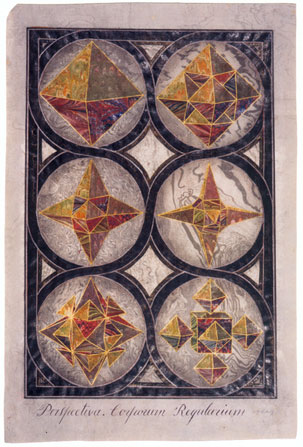 1996
20 sheets 375 x 250 mm
Each sheet demonstrating six stages of integral paper marbling on a suminagashi ground, over watercoloured and outlined in gold ink, surrounded by an interwoven ribbon in gold leaf outlined with maroon ink. On Cockerell paper (watermark of a cockerell’s head, dated 1973).

Integral paper marbling is a technical term to describe where more than one pattern is combined on the page by using a complicated stencil procedure, not to be confused with the relatively simple technique of collage. The earliest examples of integral marbling originate from the Persianate seventeenth century Adil Shah dynasty of Bijapur in Southern India, these marbled pictures raised the art of marbling to a new level, beyond its more customary use as the borders of paintings, book endpapers, or backgrounds for fine calligraphy.The technique was ignored until the 1980’s when Day began researching the background, (see exhibition catalogues: ABRI The Mysterious Art of Paper Marbling. Kufa Gallery, London 1988. Marbrure Integral Bibliotheque Municipale, Rennes. France. 1990. Perfect Form, Diorama Gallery, London l996. All lodged at the National Art Library, V&A London).

Graham Day was born in London in 1946 and studied fine art at Bath Academy in Corsham and the Slade school of Fine Art in London. He lectures in the history of printmaking. Examples of his work can be found in the following public collections. British Library, British Museum, Victoria and Albert Museum in London; Bibliotheque Nationale in Paris; The Museum of Modern Art in New York U.S.A. and numerous private collections including that of H.H. Prince Sadruddin Aga Khan, Geneva.

20 sheets in custom made portfolio.