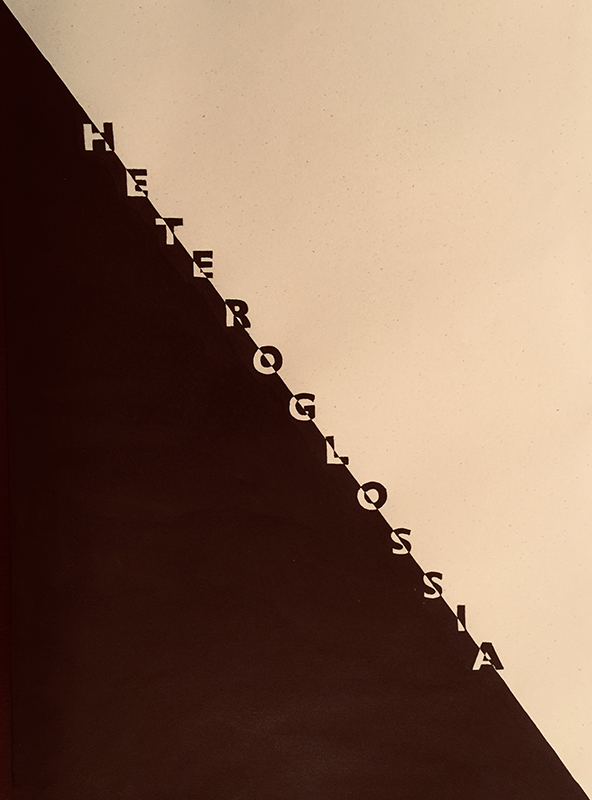 Heteroglossia is a bound collection of 30 images of existing prints that have collages and coloured drawings added to them.

The term Heteroglossia was first used by Mikhail Bakhtin (1895 – 1950 ),  a Russian philosopher and literary theorist who tells us…
“heteroglossia is a double voiced discourse, as it serves two speakers at the same time and expresses simultaneously two different intentions: the direct intention of the character who is speaking and the refracted intention of the author”.

He was referring to literature, I have applied it to images. The two voices/images in my work represent the combination and interaction of the Dionysian nature (the figure) symbol of the spontaneous chaotic life force and the Apollonian nature (the geometric figures) alluding to control, rational thought. So, Pythagoras is entangled within his silver theorem, Apollo content with his golden regular cube. Belasarius in old age contemplating his idealised model of the perfect battle plan.

The original plates range from 17th century hand coloured engravings to six modern reproductions on antique paper from the Dover edition of the works of Vesalius, indicated by a pencil N in the bottom left corner.
The sizes are mostly foolscap (15 x18.79 inches ) and slightly smaller.